So, I’m obviously not going to debunk my map myths in the order they are stated, but in the order I’ve defined as “what Atle feels like writing about at a given moment”.

That brings us to myth 8, which I guess is more a myth among people buying web map solutions (and usually with a GIS-background). But then again, there are apparent solution to this problem, and there are web maps that seems to have solved it, so I guess there are programmers that believe that this is possible as well. Hence: a myth about maps (and web maps to be specific) worth writing a couple of words about.

But first, let us properly define what this myth is about: Scale (or scale numbers). To quote Wikipedia on “Scale”:

Or, as I first heard the concept of scale described when I got into the (weird) sport of Orienteering. A map scale of 1: 50.000 means that 1 cm on your printed map equals 50.000 cm (or 500 meters) in the “real world”. What implications does this have? The first, and most important one is that there is a defined relationship between the real world and the map. In other words: you can bring out your ruler, measure a distance on the map (say 10 cm), check the map scale (say 1:50.000) and then figure out that you still have 5000 meters (or 5 km) left to walk before you can rest for the day.

This relationship between the map and the real world is ingrained with people that work with maps, and naturally they expect that this relationship holds for maps on a computer screen as well. My statement is that this is in fact a myth and a falsehood. And, it seems like the rest of the world agrees, when did you last see a scale printed on a web map? I had to dig a bit and found the previous version of the map client from the Norwegian Mapping Authority as an example. 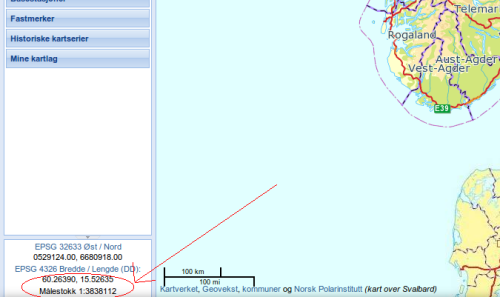 Look at the screenshot above. (“Målestokk” is scale in Norwegian). If we apply the concept of scale we know from printed maps the following principle could be used:

So, if we trust the measure-tool there is clearly something wrong with the scale on my screen. Go ahead and try the same on your screen, and I will almost guarantee that you won’t get the same result as me. Why? Because pixels does not map to actual, physical, length. Several factors come into play, most significant is screen resolution. Mapping libraries such as OpenLayers assumes a DPI of 72, because this was determined to be a standard in some day. Later recommendations is to use 96, but you still won’t match every users screen resolution. Think of mobile screens and retina screens for example.

Thus: the notion that map scale works on a screen in the same way as on a printed map is flawed. So, what to do? One thing that will work is to display a scale-bar (which you can see on the screenshot above). This works, because the relationship is the same, so if I measure how may centimeters the 100 km bar on the screenshot is on my screen (about 1.3 cm) I can get the scale: 1: 7692307.7. This translates to a distance Oslo – Trondheim of about 384.615 km, which is (given all the error sources) in the ballpark of a correct answer.

So, skip fixed scale numbers, and use a scale bar. Even simpler, do not talk about scale at all, but operate with zoom levels such as “country”, “city”, and “street”. In this way you give no impression that your web map has a scale in the same way as a paper map.

So, with these calculations I think I’ve debunked this myth. I’m aware that I’m a bit hazy on the cm – pixel – dpi – relationship, but that’s intended. I’m no expert on these things, but I do hope that some knowledgeable reader can fill in some gaps for me?